Our final Social Lightscapes workshop was in Paris (27-30 October 2017) was a collaboration with a range of institutions involved in the regeneration and redesign of the Places des Fetes, 19th arrondissement, in the quartier of Belleville. These included the Mairie de Paris, Dido and ACE, and was timed to coincide with the biennial PLDC conference, this year located in Paris. The 35 workshop participants therefore were almost entirely lighting professionals drawn from around the world, from Melbourne to Bogota, plus several Parisian art and design students. Unusually, for this workshop Elettra and Don had the advantage of being commissioned by the Mairie to carry out several days of social research on the Place des Fetes in July 2017, and therefore had field experience and considerable primary research material to work from.

Although one of 11 public squares currently being regenerated by the Mairie de Paris, Place des Fetes is unique and exceptionally complex. The square was the heart of a working class neighbourhood, once the last bastion of the 1871 communards. It was demolished and reformed in the 1970s in a brutally modernist mould, including tower blocks of social housing rising from within the square itself and in the surrounding streets to the north. The southern environs, as well as the Buttes-Chaumont area further north, survived as a traditional Parisian quartier, but are now increasingly desirable as one of the remaining affordable areas for younger professional Parisians. Finally, this is an intensely multicultural area, defined by many waves of immigration.

The theme for this workshop was ‘regeneration’: there was a clear need to rescue a valued space from dilapidation and spatial incoherence, and yet there was also a long term failure to find a concept or strategy. There had previously been a high profile redesign by the ‘postmodern’ architect Bernard Huet in the 1990s that left behind some bewildering structures and ground plans. There have been many consultations and studies over the past few years to the point that residents clearly let us know that someone should do something, anything, rather than ask them again for their views…  On top of this, the city realised that they had focused entirely on Place des Fetes by day, with virtually no attention to its very active early evening and very dead night-time.

The relation between social life and social space was complex, fragmented, illegible and to some extent simply mismatched: Although officially a ‘public square’, Place des Fetes doesn’t necessarily work as one. The vast majority of footfall is commuters using the metro station, scarcely aware that they are skirting a large public space. The main users of that space are diverse, and not entirely using it as a public space – eg, the residents of the tower blocks within its perimeter see it as part of their private space (that should be kept quiet and clear); many ethnic residents use it as an extension of their homes (looking after kids, hanging out in the evening). There are children of various ages, all occupying different zones (playground, central square), in complex interaction with other users.

Finally, there were some very public debates about the identity of the Place des Fetes that centred (not entirely helpfully) on two symbols: Firstly, the square is widely known for its three day a week market that draws buyers and sellers from a wide area. However it is to be moved to the perimeter of the square, leaving the whole space to be redefined and ‘activated’.  Secondly, the ‘postmodern’ redevelopment left behind – in its centre – a pyramid structure on a platform that lights up as a beacon at night; despite falling into horrendous disrepair, and despite a decision to remove it, the structure is popular amongst some stakeholders.

We structured this workshop spatially, each group being assigned a site to focus on. This was partly because the square was so socially fragmented that we couldn’t isolate 4-5 significant stakeholder groups; a spatial approach meant that each workshop group had to map the many different overlapping and interacting stakeholders using their site. One positive consequence was that we could see a convergence between groups – with a longer workshop, we could easily imagine a design for the whole square emerging.

Although each site had very different dynamics, a common dilemma recurred: in each case, there were spatial and architectural structures left behind by previous interventions, only some of which had earned a meaningful place in peoples’ use of the square. Each group had to decide whether these design elements could be ‘redeemed’, building on stakeholders’ social practices, or whether they needed to abandon them and find coherence in some other way. Our groups engaged with different versions of these issues:

Strolling through light: Group 1 dealt with the pathways that led from the Metro, along the west side of the Place. Stakeholders followed clear ‘desire lines’; there was no reason to interfere with these, only to make them more pleasant, legible and acknowledged after dark, and perhaps to indicate other social and spatial opportunities. For example, to light some alternative pathways or link up with social activities in the central square, giving commuters a sense of moving through and around a wider social experience – the rest of the life of Place des Fetes.

Our place, our playground: The north of the square involved intricate informal zoning – a wall people sat on to socialise, sell food and watch their children, who either played in an area just in front of the wall (if about 6-10 years old) or who hung out in the centre of the square (as they hit their teens). Lighting was used to map social rather than spatial structures: eg, task lighting to acknowledge how people hung out on the wall, helping them to sell goods or chat quietly; blades of light that simultaneously created a game for skateboarders and a way of marking out the distribution of social gathering on the wall.

Heart of the square: Group 3 focused on the large centre of the square itself. Previous lighting plans sought to impose a literally square-shaped structure that was unrelated to any social uses of the space. Working with stakeholders brought out diverse styles of use that lighting could support such as spaces for small intimate gathering, and lighting of the central stage for more spectacular fun. Both emerged from existing patterns of use rather than a coherent spatial design vision.

Taking Place: Group 4 dealt with a part of the square that was dominated by two inherited structures. A fountain in the shape of a labyrinth, although not functional, was valued as a space that was not ‘owned’ by any particular stakeholders, a quiet space that could be shared by everyone; the lighting could support its value – which wasn’t the value intended by the original grand postmodern design – as a quiet, contemplative stopping point for everyone. By contrast a giant ‘ombriere’ structure was widely regarded as irredeemably meaningless. The strategy was not to attempt to give it coherence, but to go around it, using lighting to support other spatial zones and to spatially extend the shared quality and quietness of the fountain through other means.

Approaches: At the far northeast, a small square led to an almost invisible yet major entrance to Place des Fetes. It was one of the main through routes for commuters en route to the Metro, and anyone going shopping. The little square itself had a bar and shops but was dead after dark, plus the area had a ‘disreputable’ reputation. Group 5’s lighting design addressed a very widely and clearly articulated desire simply to socially value and upgrade this space (including potentially very attractive features), and to include aesthetically rich wayfinding into the design.

Entrances and exits: Group 6 were tasked with studying three passageways into the southern edges of Place des Fetes. These were little used in evening or night, and research turned up concerns about legibility and safety; all three were considered obscure. At the same time, the social research also showed up a range of very site specific problems, down to the level of particular retail signage and specific trees. They responded by developing a different approach to each passageway (either more formal or more playful), and a toolkit of lighting considerations for each. 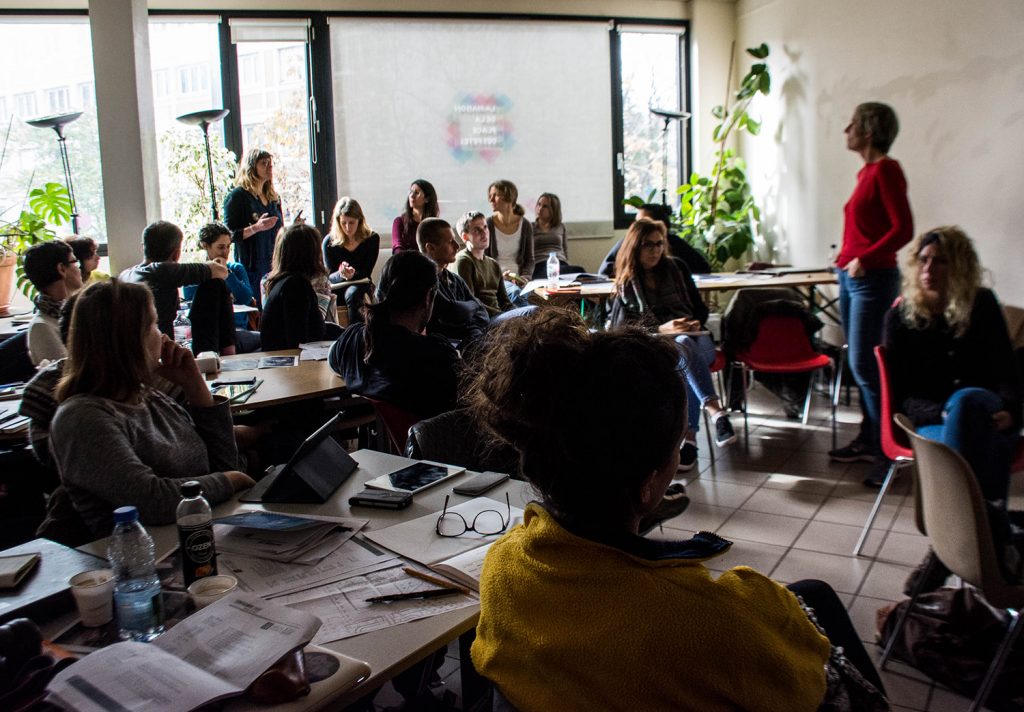 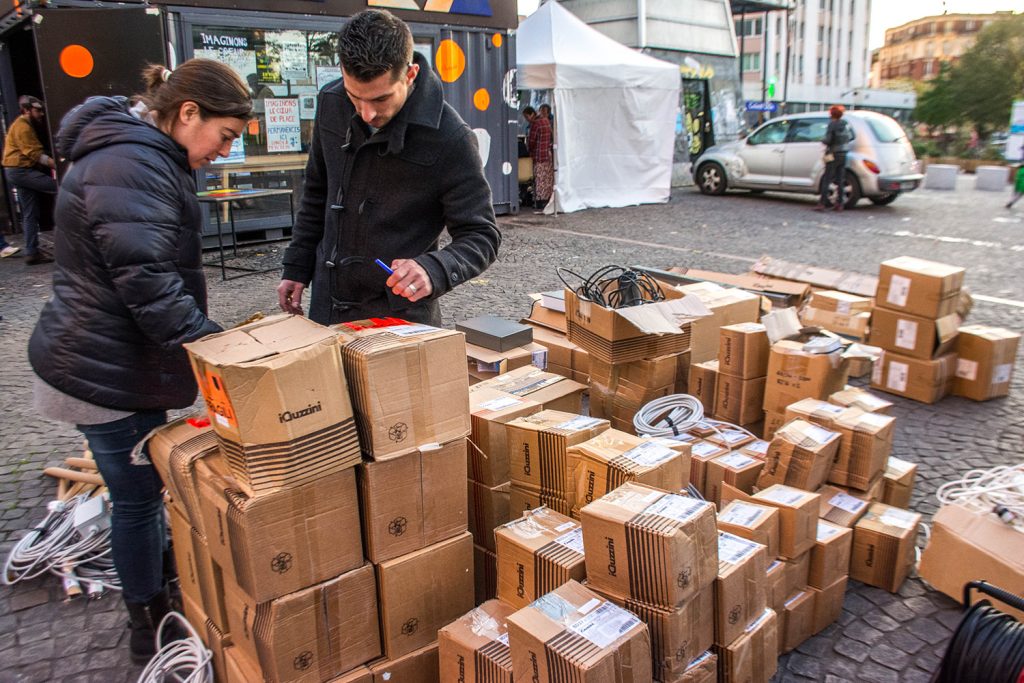 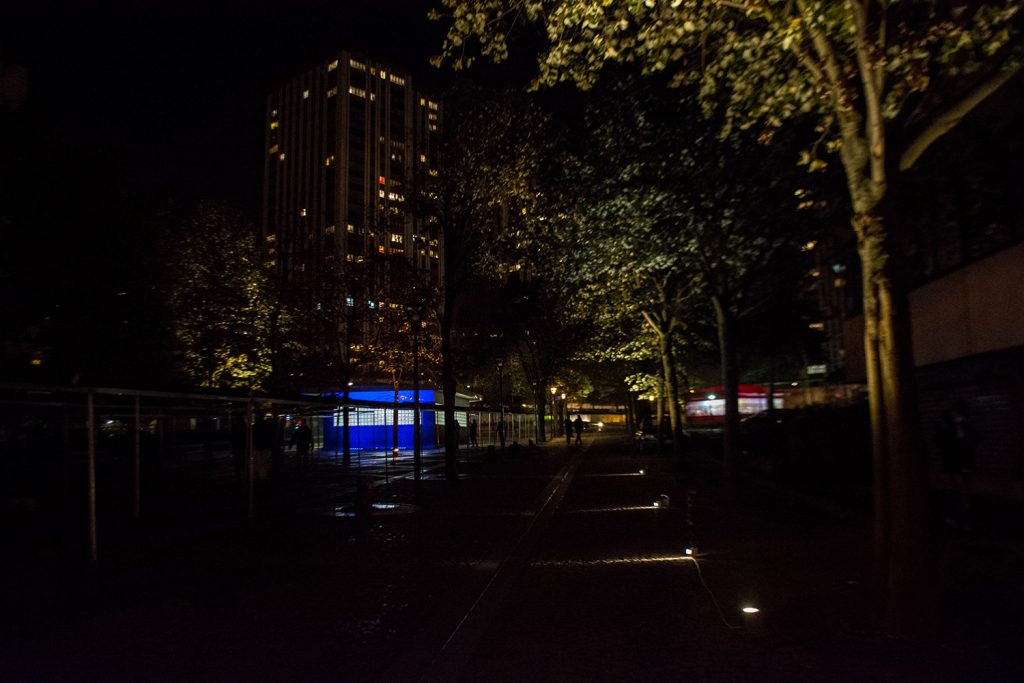