Reflections on LIGHTING THE LOCAL

Our second ESRC seminar took place on 24 September at LSE Cities and was focused on issues of locality and urban public space. The theme ‘lighting the local’ was inspired by the research the Configuring Light team conducted earlier this year, on the lighting master plan of Derby city. This research, in conjunction with Derby City Council and Speirs+Major (S+M) lighting designers, brings together a number of core Configuring Light themes: how lighting shapes our sense of the city space, promoting (or not as the case may be) the legibility of the city at night by lighting pathways and nodes, and how it can be utilised to give a more unified and attractive sense of place at night. Our research ‘Derby After Dark’ fed directly into the master planning by S+M and the morning panel presented this project to a public audience.
Chaired by Professor Fran Tonkiss from LSE Cities, the panel opened with Pranali Parikh, Principal
Regeneration Manager at Derby City Council, who talked through the regeneration plans for Derby and the impetus behind the contracting of a lighting master plan by S+M, not least the desire to find a creative solution to the current engineering approach to lighting the city that has been locked into a twenty-five year public-private initiative (PFI) with Balfour Beatty. Currently Derby lacks a coherent night-time identity and the city is split into two very different and separate areas: the historic Cathedral Quarter which contains most of the night-time economy and attractive heritage lighting in some streets, and modern St Peter’s shopping area that offers little at night as is currently over-lit. Pranali’s talk gave the audience a flavour of the challenges faced by S+M.

Satu Streatfield from S+M then described how she met the challenge to try to unite the two parts of the city and along with a third, under-used area along the Riverside. The master plan involved taking the light levelsdown considerably in St Peter’s Quarter as well as a pilot lighting solution to the key node in this area, St Peter’s church. Currently unlit and disappearing into the shadows behind the tall masts that flank it, the S+M solution to lighting the church and giving it an identity, is to take the overall ‘lux’ levels down and reduce the shadows and fall-off, and use the light from the inside of the church window to make it stand out. The result is a simple but effective strategy in terms of creating an identity for the church and the street and increasing legibility for the area.
Don Slater, Configuring Light/Staging the Social, then talked through how our research fed into the design process at S+M, detailing the social research we conducted with city users. In particular, Don described how our research demonstrated the importance of disaggregating the city and city use into different stakeholders and users, and how our data threw up a number of unexpected lighting pathways as a consequence of our qualitative approach. These findings were reported back to S+M and were part of discussions throughout the course of the master planning.
The first session of the afternoon workshop explored examples of how public structures can be grounded in localities. Architectural modernism is generally understood as a confrontation between universalistic, placeless design principles and localities that are transformed or obliterated in the process. Dr Adam Kaasa, Royal College of Art, used examples of Corbusier-inspired architecture in Mexico to argue that in fact modernism is better understood as a particular dialogue between the local and the ‘universal’ than as the triumph of one over the other. In this dialogue, lighting has played a significant role: two examples from Canada give a sense of how lighting can ground generic structures in localities. Derek Porter, Parsons The New School for Design, presented examples of community-oriented projects that used lighting to transform anonymous but strategic bridges so as to alter experiences of their localities.

The final afternoon session was focused around lighting practice itself and specifically contrasting differentways of working with light to generate a sense of place. We heard from Florence Lam, head of Arup’s global lighting team, and her way of working with very new, developing cities and from Elettra Bordonaro about the challenge of creating a sense of place where little historical or prior culture exists. For Florence, the challenge of working with developing cities in the middle east is how to generate a sense of place, identity and history where there is little history to build upon. She described how she works with clients and localities. For Elettra Bordonaro, the issues are played out on a much smaller, more localised scale. As co-Founder of the Social Light Movement she has worked with small communities on part of the city often neglected or overlooked and this involves demonstrating how light can create special place in the city, just like the graveyard garden in Providence, or from her commercial practice, the lighting of a commercial neighbourhood in Cyprus, where references to the city’s lace making were made through careful play of lighting shapes.
This second seminar raises even more questions for us about methodology and process. How can we
research the communities we wish to light? The methods that are appropriate, and do-able in a small scale neighbourhood or city like Derby, are not necessary possible in large, rapidly expanding cities that Arup are contracted to light. These discussions of method and practice will continue into the remaining seminars. 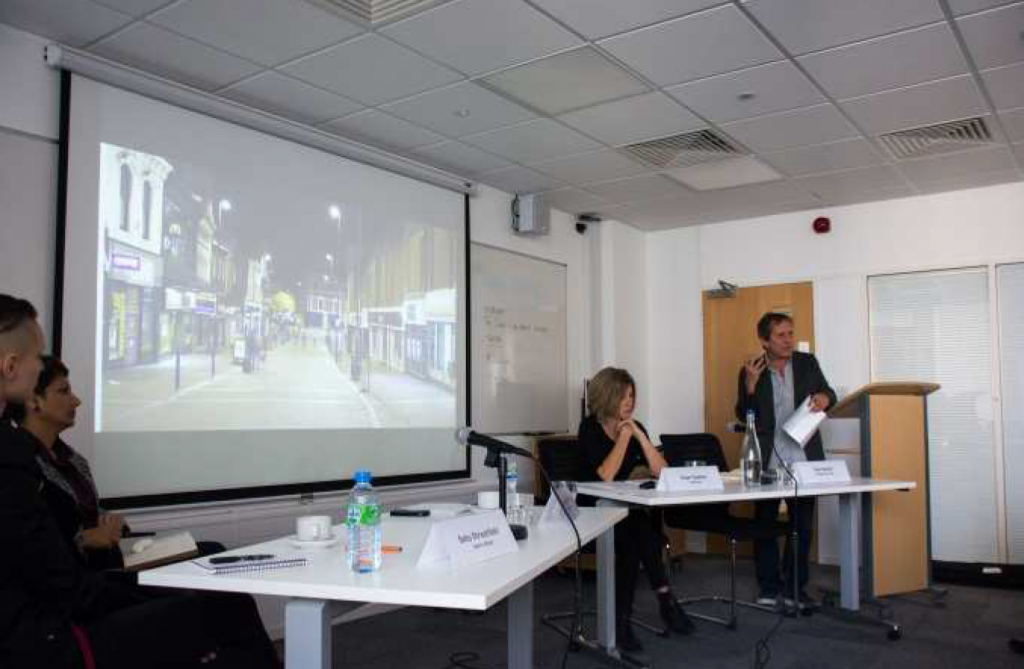 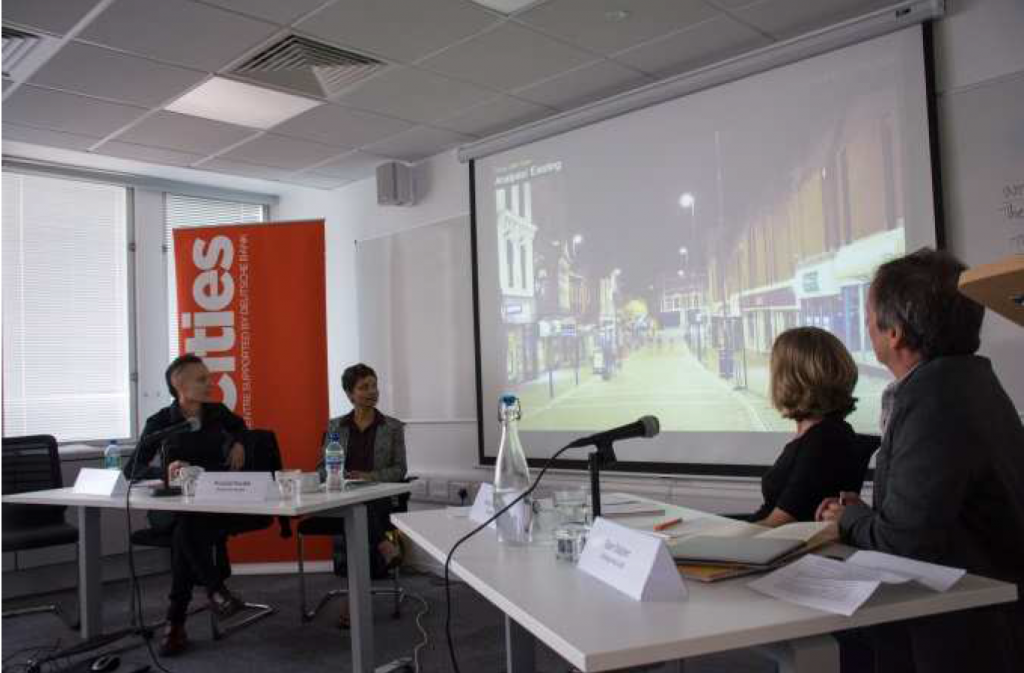 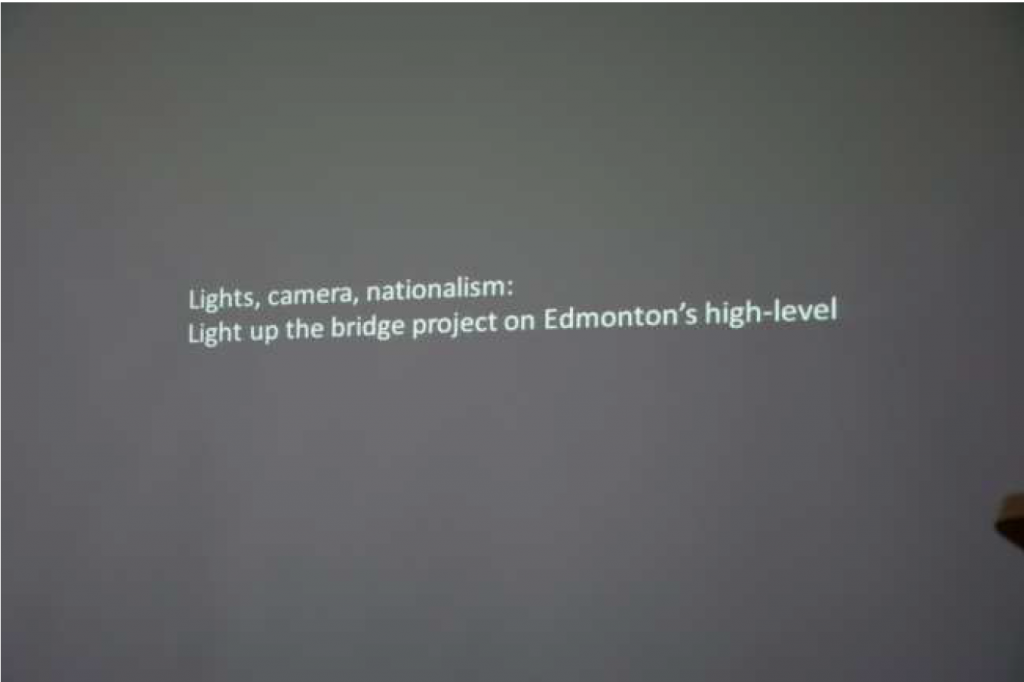 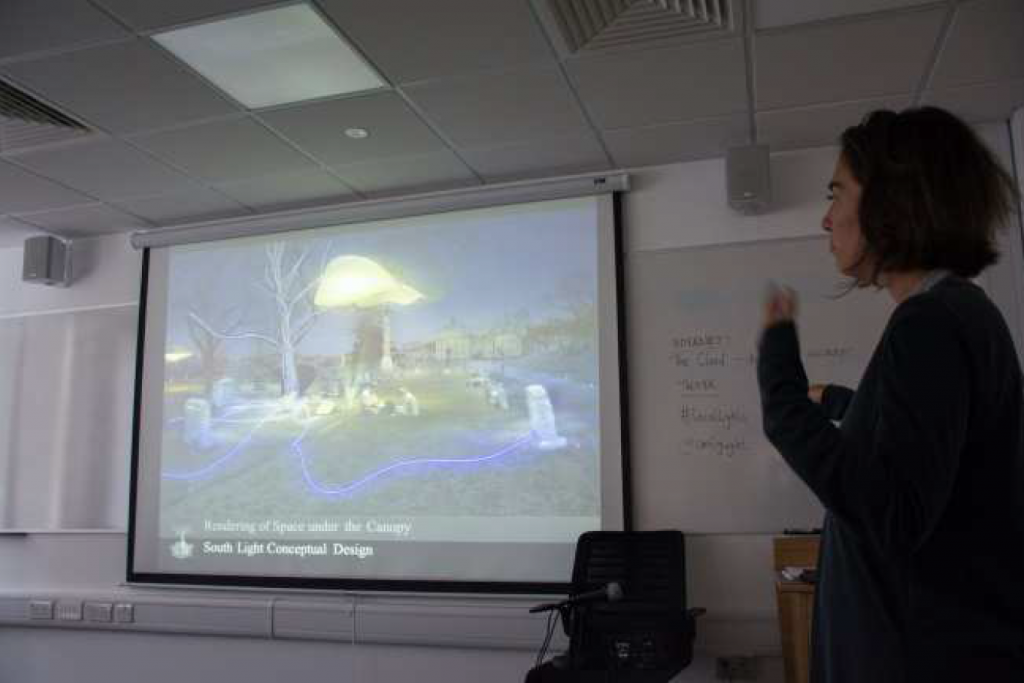